I’ve been trying to come up with some witty intro all day, but it’s Monday, and my brain hurts.

When I set my 2012 goals, I really wanted to work on reading more and watching TV less. So far so good since I haven’t really sat in front of my TV at all this month. My DVR is giving me that little flashing message which I’m pretty sure means it’s going to self destruct anytime. It’s been fun disappearing into a good book lately.

One of my first rentals, when I got my Library card earlier this month, was a design book that I’ve had my eye on for a while.

Domino: The Book of Decorating: A Room-by-Room Guide to Creating a Home That Makes You Happy

There was always something about this book that intrigued me, but I could never bring myself to buy it. I was a big fan of Domino magazine, and the book had the same great information. It walked me through the design process, and I think it would be great for anyone that was just starting design or a hobbyist. I thought it was an excellent resource and had some really great inspiration pictures; but I own other books that covered the same basics so I probably won’t buy it for myself.

This book is a testament that even with the library, I will still pay for books. I had heard so many great things about this book that I was bummed when my library had it on hold. It wouldn’t be available for a few months, so I checked the kindle price ($12.99), which was a little steep for me. However, I found it a few days later at Costco for a few bucks cheaper so I bought it. I’m a sucker for Costco’s cheap book prices.

Verdict: LOVED IT! It also scored a reading record since I finished it within 3 hours. It’s an easy read and hilarious, exactly what everyone told me it would be.

Another Coscto book purchase, mainly because I liked the cover and the story idea. It was a murder mystery that had a few really good twists and turns. I’m usually the person that figures out the ending pretty early on and this one caught me off guard again and again, totally didn’t see it coming. The book does drag a bit, I wish it had been a bit shorter, but overall a good story for a rainy weekend.

Beautiful Boy: A Father’s Journey Through His Son’s Addiction

Earlier this month I made a trip to my local Barnes & Noble, looking for a specific computer book that they didn’t have at my library. Turns out they were also having a big clearance sale…lucky me.

I picked up this book for about $5 and it was worth every single penny. I really love biographies and this was a very well written story about a dad dealing with his sons addiction. It was gritty and beautiful. It was also really interesting to read since his son is the same age as me and I recognized a lot of the world his son lived in.

What the Dog Saw: And Other Adventures

This was another book that I picked up at the BN clearance for about $5.

I was impressed with the first part of the book, interesting accounts from news articles that the author had written in the past. The story about the infomercials was really fascinating. However, I was so bored in the second section that I stopped reading it. I also found that I was scanning a lot when I read, as I felt some were so way over told. Lots of information, some was fun, some put me to sleep.

I’m a little sorry I paid for this book, but a few of the articles that I read were good enough to at least rent the book if you wanted something fun to read. 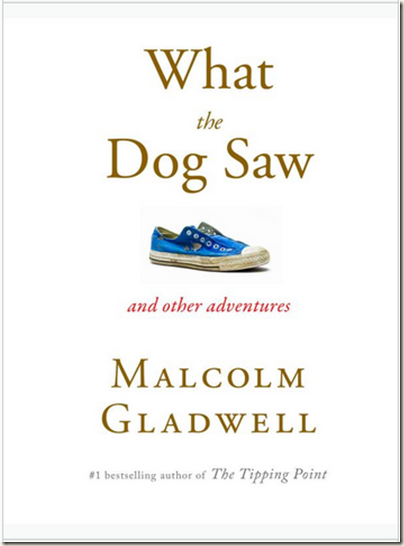 What have you read this month?

Thanks for stopping by and checking out my journey to change my destiny. I'm a home decor addict, healthy living amateur, doggie mama, and a yogi wannabe. Feel free to follow my misadventures of weight loss, healthy living, home design, recipe creating, etc.

If you want to see more of my random musings and inspirations, check out the Changing My Destiny Tumblr page.

Error: Twitter did not respond. Please wait a few minutes and refresh this page.

Disclosure of Material Connection: Some of the links in the post above are “affiliate links.” This means if you click on the link and purchase the item, I will receive an affiliate commission. Regardless, I only recommend products or services I use personally and believe will add value to my readers. I am disclosing this in accordance with the Federal Trade Commission’s 16 CFR, Part 255: “Guides Concerning the Use of Endorsements and Testimonials.”
%d bloggers like this: