The temperatures have finally started to cool down, the next week should be in the 70’s with possible rain. It’s starting to feel like fall around here. Autumn is by far my favorite season. I love the cooler temps and windy/rainy weather more than I love the 90 degree temps (or more often 105+ in my area).

Also something to be excited about…sugar pumpkins are out!

I may be the last person to realize, but you don’t eat those big pumpkins. I always assumed that you could either carve them or use them for pies. Turns out they are grown specifically for carving and not meant to be eaten (the seeds are the exception). You actually want to purchase Sugar Pumpkins or Pie Pumpkins for baking and pumpkin goodies. They are the smaller pumpkins that typically run about 1-2 lbs.

This year I bought two for the best treat of all…Pumpkin Butter! (Finally, right?! I’ve only been promising you this recipe for a year).

I’ve recently made pumpkin butter out of canned puree and fresh pumpkins. The texture is the same, so you can actually use either type of pumpkin you prefer. I can usually find pumpkin puree year round in the grocery store, so I’d go with the novelty of the Sugar/Pie Pumpkin if they are in season.

In this recipe I chose not to use the standard Pumpkin Pie spice, and measured out separate spices which led to a ‘spicier’ flavor profile, mostly due to the ginger. You can cut back on the ginger if you prefer a less spicy butter. Or add 1/2 up front, then add the rest later on if you’d like.

To add extra flavor, in place of water, I used apple juice. I also threw a few cinnamon sticks into the crock pot while the butter cooked down. I later added a little more cinnamon for taste.

To my knowledge, there is no super easy way to cut up a pumpkin. This is the best way I know how and it works pretty well. It will still be a bit messy, but it’s rather quick. I use the same technique for melons and pineapple.

Cut off the top and bottom of the pumpkin using a sharp knife [insert knife safety discussion here, I don’t want anyone losing a finger!].

Set the gourd on it’s end and start cutting down the side to remove the rind. This takes a little concentration since the pumpkin will start to fold on itself a bit.

Once you have all the outside cut off, cut the pumpkin in half and scoop out the seeds. Then chop the meat into chunks.

Toss the pumpkin with the sugar and spices.

Don’t throw out those seeds! I was surprised, there were a ton of seeds in those little pumpkins. These would make a great snack when roasted and seasoned!

2. Toss the sugar and ground spices with the chopped pumpkin.

3. Add the pumpkin mixture to the Crockpot. Add the apple juice and cinnamon sticks. Set the Crockpot on low and close the lid.

4. Let the pumpkin cook overnight or while your at work (about 8 hours). When soft enough, remove the cinnamon sticks, and use an immersion blender to mash the pumpkin into a puree. You can also use a blender, food process, or even a potato masher for this step. Add the 1/2 teaspoon ground cinnamon and stir to combine.

5. Change the Crockpot temperature to high and vent or remove the lid. Let the mixture cook down until very thick, there should be no visibly liquid/water left. I cooked it on high for about 3 hours, but this step can vary per batch. Your batch may need more or less than 3 hours.

6. Once it’s done, let it cool. Depending on your preference you may want to blend it for a smoother consistency. I used a magic bullet to blend the mixture. I will warn you, since the finished product is so thick (you’ve cooked most of the water out at this point), you may need to add a bit of water to the blender. Add a tablespoon as a time if necessary to help the mixture blend more easily.

Test it out right away and spread it on a piece of bread/toast. Absolutely delicious!

Of course you could also spread it on pancakes or waffles, mix into yogurt or pudding, or use it in place of jelly in a PB & J…the possibilities are endless.

My favorite way is to mix it in with some Greek yogurt and walnuts. 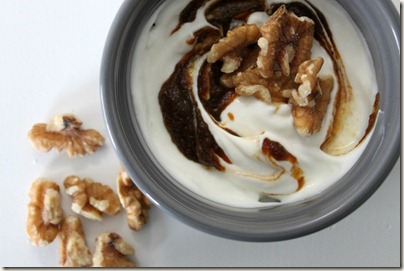 You can ‘Can’ this recipe and save for a future date, or pour into clean canning jars and keep in your fridge. Fruit butters typically keep for about  a month if closed tightly and kept in the fridge [I bet you eat it long before that!].

Hope you enjoy as much I do.

I HATE being scared. I’m slightly paranoid by nature, freak out when people intentionally startle me, and that Scream masks still gives me nightmares. I don’t mind Halloween at all, as long as no one tries to scare me. If you jump out at me or sneak up on me and try to scare me, my fight or flight response kicks in, and I may just punch you in the face.

It’s happened before. Consider yourself warned.

On the other hand, I like the holiday season which encompasses Halloween since Fall is my favorite time of year. I even like some of the cutesy Halloween decor, like this little guy.

See? Cute little mummy pumpkins are okay. Scary mummy pumpkin that might eat your face off while you sleep, not so much.

You get the point.

This year to get into the Autumn spirit (since the weather has not been cooperating) I visited a local pumpkin patch. Folks, this is the real deal, not one of those pop up patches that set up in your grocery store parking lot.

Welcome to Bate’s Nut Farm (aka the biggest pumpkin patch I’ve ever seen). This place is seriously huge with endless events, activities, and pumpkins!

This is only one of the several patches. Do not be fooled, those pumpkins could be used as a desk chair.

They give you wheelbarrows to get them to your car. The pumpkin patch version of the shopping cart.

Heirloom Pumpkins. I really loved these and wish I had bought some, they were beautiful.

Of course you could buy pumpkins that have already been pulled from the patch, they had piles of them.

It was my first time to a real pumpkin patch and I walked away without even buying one. How anticlimactic. However, we had a great time wandering around and people watching for a bit. Watching the kids run through the patch was well worth the visit alone. It was so adorable to see their eyes light up at the sight of pumpkins that could double for Cinderella’s Coach.

I just can’t help but smile every time I pass this little guy. He was so easy to make and is just so adorable I can’t stand it.

Below was my  inspiration…and I’ll admit theirs came out a little better than mine. Mine looks a little more marshmallow than theirs, but I love it all the same.

Cut the cheesecloth into strips

Apply the fabric starch to the cheesecloth. I used a spray starch because for some reason I couldn’t find liquid fabric stiffener anywhere. The spray starch worked fine, but you need to really drench the fabric. I used a cardboard box to contain the spray and minimize the mess.

Start placing the wet fabric on the pumpkin. There’s no magic with this, just go with your gut. It took me a few tries to figure out the starch and the first few pieces were too dry. REALLY drench them.

Affix the googly eyes. You can use hot glue, but I used tacky glue and they are holding just fine.

After you affix the eyes, add a few more layers of cheesecloth to cover the eyes just a bit.

Optional: the inspiration picture advised to cut out a small opening and paint a little mouth, but I acutally liked mine better without the mouth.

Ok, seriously, how do you not smile when you see those eyes?

Thanks for stopping by and checking out my journey to change my destiny. I'm a home decor addict, healthy living amateur, doggie mama, and a yogi wannabe. Feel free to follow my misadventures of weight loss, healthy living, home design, recipe creating, etc.

If you want to see more of my random musings and inspirations, check out the Changing My Destiny Tumblr page.

Disclosure of Material Connection: Some of the links in the post above are “affiliate links.” This means if you click on the link and purchase the item, I will receive an affiliate commission. Regardless, I only recommend products or services I use personally and believe will add value to my readers. I am disclosing this in accordance with the Federal Trade Commission’s 16 CFR, Part 255: “Guides Concerning the Use of Endorsements and Testimonials.”